Life In The Berkshires

Grace Church, an Episcopal Community in the Southern Berkshires began in 2013. We worship at the Barrington Brewery’s beautiful reception hall, Crissey Farm. In this non-traditional space, our worship is refreshing and eclectic, yet we are always aware of the presence of God. Involved and committed to partnerships of service and mission throughout southern Berkshire County, we operate the Lee Food Pantry in Lee, and partner with Taft Farms to operate Gideon’s Garden. We also participate in the People’s Pantry in Great Barrington.

Although Grace officially began on January 1, 2013, our roots go back 251 years.  The way Grace came into being is an amazing story, and we are at once the oldest and the newest church in the Episcopal Diocese of Western Massachusetts. We are a vibrant, new congregation that includes the history of two historic churches: St. James, Great Barrington, and St. George’s, Lee. 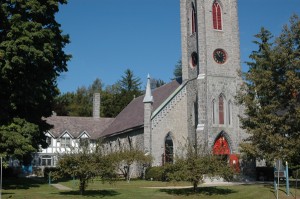 St. James Church, Great Barrington, was founded in 1762 by English missionaries from the Society for the Propagation of the Gospel in Foreign Parts. On the Feast of St. Matthew (September 21), 1762, Thomas Davies, an Anglican priest, instituted a new parish here consisting of seventeen families who expressed their willingness to conform to the doctrine and discipline of the Church of England. Thirty-eight priests have served St. James’ Parish, either as Rector or Priest-in-Charge, but none more remarkable than its first resident Rector, Gideon Bostwick. He first served as Lay Reader from 1765 until 1769, when he went to England and was ordained to the priesthood by the Bishop of London, who had ecclesiastical oversight of the British Colonies. Bostwick returned as a missionary of the Society for the Propagation of the Gospel in 1770, and served as Rector of Great Barrington until his death in 1793.

During those years he not only served faithfully in this parish, but used Great Barrington as a base for missionary endeavors to the northward. He rode on horseback 80-100 miles per week to spread the Christian Gospel to people in Connecticut, Vermont, New York State, and Massachusetts. In 1804 the church’s name was changed to “St. James” to honor Gideon Bostwick.  As the first Church of England parish in western Massachusetts, it has a long, faithful, and sometimes colorful history and the congregation has had three different church buildings in Great Barrington.

Members of St. James were always very involved in the community of Great Barrington, and the third building was open to many community groups who used it for meetings and events. It was a concert space for the Aston Magna Summer Musical Festival (where the entire Brandenburg concertos have been recorded on Baroque period instruments). In the town of Great Barrington there are two housing complexes that owe their beginnings to members of St. James. Built in the 1960s Christian Hill Commons was the first affordable housing project in the town, when the concept was unheard of. St. James Community Housing, commonly known as Bostwick Gardens, built in the 1980s, received its HUD funding because of the support of St. James and has had a member of the congregation on its advisory board ever since.

As long as anyone could remember, good music was a vital part of St James worship and parish life. In 1918 Alice Walker bequeathed a 53 rank Austin pipe organ to the church along with an endowment for its care and maintenance. Our previous three Ministers of Music were serious and dedicated musicians who contributed greatly to the community with their varied gifts. The church with its fine acoustics became a major venue for concerts such as  the Berkshire Bach Society,  Close Encounters, and Aston Magna.  Organist Paul Hamill was a composer and wrote a lot of music including many hymns and liturgical music, and  publishing them through his own Gemini Press. Minister of Music Charles Olegar expanded the choir and began an extremely popular series of free Sunday organ concerts entitled “Bach and Beyond”.  He also oversaw and conducted the performance of a number of Paul Hamill’s works, including  his “New England Requiem” as part of St James 250th anniversary celebration.

After the fall of the wall (July 2008), St James continued at Crissey Farm with only an electronic keyboard. But Charles Olegar and the choir insisted on keeping the variety and vitality of our music program in spite of these difficulties. Without an organ, the choir played a much larger role in leading the congregation gaining in confidence and skill. Percussion instruments such as drums, finger cymbals, Tibetan singing bells,  tambourine, and wind chimes have been used to add color and atmosphere. When St Georges, another music loving congregation began co worshiping with us, they appreciated the energy and variety of our music. 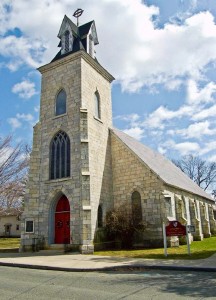 St. George’s Church, Lee, MA began in 1856 when interested people in the young community met to organize an Episcopal Church in Lee. They soon purchased a lot on Franklin St. and by January of 1858, the congregation had built a Gothic-style wooden church. The original building was destroyed by fire, and the congregation rebuilt a stone church. Another fire caused the interior to be destroyed, and when the church was rebuilt the third time, the interior was redesigned.  Eventually a parish house and new rectory were also built.  In 1991 the Community Emergency Needs Resource Center (“The Lee Pantry”) was established and located at St. George’s. St. George’s parishioners organized and ran the pantry, with the help of other churches and organizations, who staff the pantry each Saturday morning.  Under the leadership of the Rev. Donna Larson Trebilcox, St. George’s went through several years of intentional discernment about whether they could thrive on their own or if they should close. In the process, they found a third way: They decided they wanted to continue as a congregation in mission by joining with an(other) Episcopal Church(es).

How two became one:

On July 31, 2008, a stone wall at the back of the exterior altar wall collapsed on the car of the new rector, the Rev. Frances A. Hills (no one was hurt). For safety reasons, the congregation was evicted from the church at Main and Taconic Streets and found inviting Sunday worship space at Crissey Farm.  The congregation was initially in shock and overwhelmed with the issues of architects, engineers, insurance, building inspectors, and how to carry on without a building. They moved their mid-week service to the board room of Wheeler Taylor Insurance Co., had meetings at Fairview Hospital, Finnerty & Stevens Funeral Home, the Barrington Brewery, the Friends Meeting House, and other local establishments. After much fact-finding, discernment, and deliberation, St. James sold the church building at Main & Taconic in the fall of 2010 to a non-profit.  In December of 2010 the people of St. George’s Church began worshiping with St. James at Crissey Farm.

In the fall of 2010, St. George’s sold their rectory to the Town of Lee, which developed a much-needed parking lot on the site. In December 2010 Donna Larson Trebilcox accepted another call. In the spring of 2011, the worship space and parish house were sold to the College Internship Program of Lee.  The people of St. George’s wanted to continue to operate the Lee Pantry, so it was moved to the Arlodi Building in Lee. The Lee Pantry is now a mission of Grace Church. 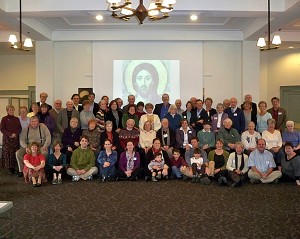 Grace Church comes into being:

When the people of St. George’s joined the worship of St. James at Crissey Farm, they were immediately integrated into the life of the parish. Frances Hills became their Vicar, while remaining the Rector of St. James. The worship, fellowship, and mission goals of both homeless congregations came together almost seamlessly, and the new creation was much better than the sum of its parts. During 2012, while St. James was celebrating its 250th anniversary (the highlight was a visit from Presiding Bishop Katharine Jefferts Schori), the two congregations went through the process of legally and canonically consolidating. They agreed that an entirely different name would help the new church have a fresh start. With much congregational input, process, and prayer, “Grace Church, an Episcopal Community in the Southern Berkshires” was chosen. The name reflects the source of our amazing story…the Grace of God. Frances Hills became the first rector of Grace Church. We continue to worship at Crissey Farm and to rely on the hospitality of many neighbors for other meeting spaces. Grace Church is committed to mission and is always looking and listening for ways we can continue to join God’s work in our community and the world.

Grace Church’s second rector, The Rev. Dr. Janet Zimmerman, was called in 2014 and served until 2020. The Rev. Cristina Rathbone was called in 2021, and currently serves as rector of Grace.